At the beginning of the dream, there were a thousand bikers going up the sides of the heavily-slimed, heavily-trafficked streets of Flagstaff Mountain. Cars were moving as if they were in an artery and were all riding up smoothly like blood.

The whole time everything was blue and cold outside like being inside of an iceberg. It wasn’t cold out, but the atmosphere was painted like we were underwater or that everything was breathing in a slightly blue feeling.

The blue air was like a form of silence or of something going away. When light comes behind the cloud and the heat is lessened in the thin, high mountain atmosphere, there is a form of going away that occurs. It is the past that is occurring. The blue air becomes a form of the creating past that we are riding through.

The cars are separate from us as if they are part of the landscape, and the people in them cannot dream. Riding in a car becomes a separation from reality, and this becomes the dream they take. Some other heart pumps them like cells, and they do not know where they are going.

Towards the top, the blue air feels like thick spring and its early feeling of absence like a pregnant sterility. The mountain comes up and comes down like a pungent green hill in Kansas which is perfectly space. There is nothing in it but space, and so it becomes itself. 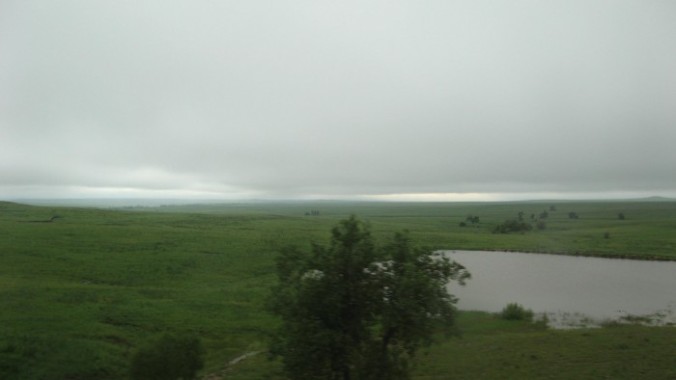 We are not perfectly space at any point, and we try to pass the others on our bikes, but we don’t. We are just not fast enough.

Now the cars next to us are coming up so fast that they start to blur so that they are like water, a hose jet spraying past that we cannot touch. The cars veer away arterially to a two-lane highway with no guard rails. They are hot and red and pulsing. They are like a snake or a long eel; you cannot put your hand between the cars because the speed creates a skin over them even as they are separate, like a train.

Now we must cross a footbridge over a blueish lake that will never have fish and is nothing but runoff. 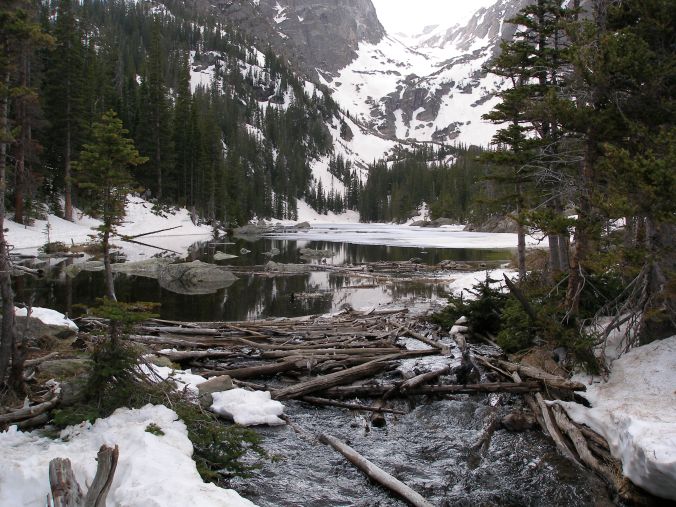 Everything is high and tight, like breathing, and whiteness covers the space in the water or air.

The footbridge is two feet across and has no guard rails and only a handrail on its right side. People are splashing across it on their bikes, periodically sliding on its uneven surface towards the deep, black water.

In front of me, a woman mumbles vaguely of the train we will all take to get back down the other side of the mountain.

“It has no windows,” she whines, “and we can’t see out. It just would need two bay windows in the corner of the train car so that we could see out.”

“No one has any windows in the mountains,” she continues, “no one cares about the view here.” She says this because she is afraid of the footbridge. It is something she can believe in that keeps her from thinking about it.

I tap her on the shoulder. When she turns in my direction, I say to her:

How can you say that we do not
Love the window?
That each tiny house
Somewhere has one window pointed
At the best view from the back,
A door opening into a scope
Of valley, or a picture window pointed
At a tiny simple willow, or
Branches only where a robin is.
This teaches us how to look,
Perhaps at beauty over serviceability
(cars or the gritty industrial),
But we make the choices of how to look.
And that these choices are invaluable.
What kind of world would we be
If the window did not live
With us, and our connectivity
With what it means to be alone,
Even while hidden or invisible
In a house, was lost?
With a window there is no
Aloneness—

But she has stopped listening. She looks down at the footbridge she is next in line to cross and tightens her hands on the handlebars.

She says, “I had an uncle that drowned once. Just like this.”

Then we cross the footbridge jinting like clowns on unicycles over the empty water. No one stays dry. Many people fall off the footbridge into the deep water; they do not get out.