Unparalleled in the geologic record, Earth’s premier superpredator has thrived in every habitat imaginable and wrought deadly havoc upon the flora and fauna in its path. Incomparable predation coupled with rampant environmental degradation has proven to be an effective skillset. In its wanton disregard of ecology, Homo sapiens has triggered the planet’s sixth mass extinction event, with estimates of species loss ranging from one hundred to ten thousand times the norm. Still, biologists suggest we are merely in the beginning stages; the true damage has yet to unfold. With our current global exploitation showing minimal signs of deceleration, the rate of destruction has yet to reach its apex. Biodiversity’s unimportance in the eyes of many only increases the likelihood of truly calamitous predictions. What world awaits us in our unceasing conquest?

Hannah Rodabaugh’s We Don’t Bury Our Dead When Our Dead Are Animals ruminates upon the costs of our success and the consequences of our indifference. Aware of the crisis’s overwhelming magnitude, she zeroes in on a handful of vanished lifeforms in order to render their demise more comprehensible. Serving foremost as an elegy for one of the strongest symbols of American hubris, the passenger pigeon, the collection considers others lost forever: the Carolina parakeet, the greater short-tailed bat, the quagga, the mamo. Many of the poems serve as ekphrasis pieces, based on archival photos documenting some of the last specimens of their kind. Acknowledging catastrophes of the past and present are vital steps in mitigating future devastation, but in mourning these forgotten beings, Rodabaugh suggests our human impulses reward a mentality in which “we do not remember / what we ourselves / extinguish.” 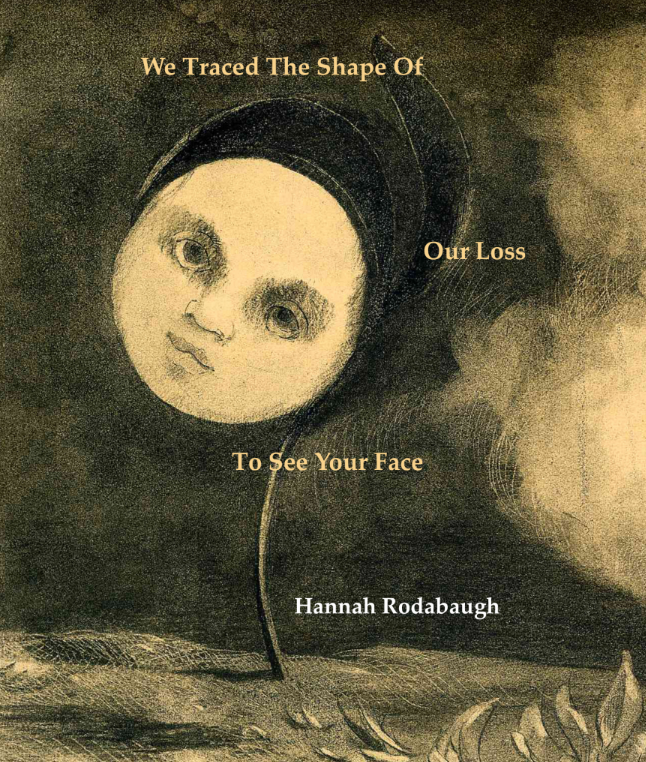 Hannah Rodabaugh’s We Traced The Shape Of Our Loss To See Your Face catalogues loss, loneliness, desire and melancholy in the dark palette of cave crickets and night beetles, burst stars, fuchsia as tarnished blue, scaly fish, clotted fibre. The chapbook considers mortality and permanence, the role of language, symbols, movement, materiality, pain and silence.

With Words: Verse in Concordance is a hybrid collection of prose and lyric pieces written as a reference volume. This collection explores the tensions between prosody and lyric, science and intuition, and human and landscape.

In a review for Open Letters Monthly, author Derek Henderson, says this about my work in A Sing Economy:

Among the most distinctive voices singing in this economy is that of Hannah Rodabaugh. [Her work] has affinities with the sound-based poetics of Christian Bök or Steve McCafferey, but takes the breakdown of language to be less a suggestion of the futility of language rather than its lovely helplessness in the presence of direct communication. . . . [T]he poems in Rodabaugh’s section are . . . lovely to behold.